Women of Wind Energy (WoWE) has recently rebranded itself as Women of Renewable Industries and Sustainable Energy or WRISE (pronounced rise). The change was prompted by a recognition that the successes of the organization’s model could reach more women working across different renewable energy fields. Importantly, women are becoming better represented in renewable energy sectors, but have not quite reached parity. According to Executive Director Kristen Graf, “Currently, women represent about 25 to 30% of the workforce in solar and wind, and only a small percentage of them are women of color, so no, women are not yet adequately represented in the renewable energy sector” (Andorka, 2017).  Welcoming women from across the renewable energy spectrum will enable more people to access the mentorship, networking, and camaraderie that the group has to offer. Check out their new video here and watch for the new website to be launched in the coming weeks. The original press release can be found here. 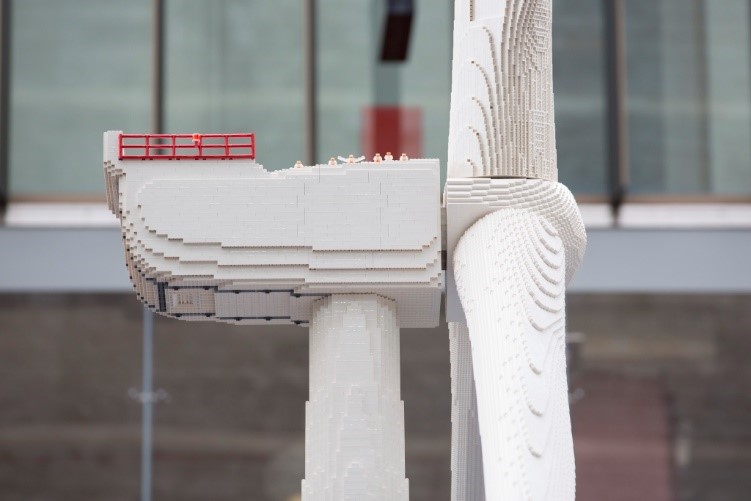 The Lego Group celebrated meeting their 100% renewable energy goal three years ahead of their target date by building the world’s largest Lego wind turbine! Their rapid transition to source renewable power is largely due to investment in a 258 megawatt offshore wind project. Kids are now challenged to build their own Lego renewable energy projects. The project set a Guinness World Record, standing nearly 25 feet tall and built with 146,000 LEGO bricks. Watch a video of the Lego turbine being built here.

This year’s American Wind Energy Association’s annual meeting was held in Anaheim, CA from May 22 to 25. California State Senator Kevin de León, who authored the state’s ambitious 50% renewable energy standard, delivered an exciting keynote address that illustrated how even states, like California, that fully experienced the growing pains of wind power development have come to embrace renewable energy – to the point of passing a 100% renewables bill in the state senate.

Xcel Energy CEO Ben Fowke described how the company is meeting the economic and environmental demands of customers, by stating “We’re investing in wind because of the tremendous economic value it brings to our customers. Wind energy is saving our customers billions of dollars in fuel savings.” “We’re also delivering on the environmental front by deeply reducing carbon emissions while providing a clean energy product our customers want” Fowke added (Lillian, 2017). Read more about AWEA here.

The report includes traditional hydropower (8.67%) with wind coming in a close second at 7.10%. Read the report here.

Windustry and its partners are planning new fun activities for the Wind Energy Center in the Eco Experience Building that will teach thousands of Fair goers how wind energy can provide both environmental and economic benefits to Minnesotans. The State Fair is an ideal environment to engage the public on the benefits of wind energy. The Eco Experience is among the most popular exhibit buildings at the Fair and just about everyone who visits stops by to examine the MN Wind Resource Maps, to discover the best places to #StickWindHere, or just to have a conversation with our staff and volunteers.

To partner or volunteer this year, contact Henry Klaverkamp at henry.klaverkamp(at)windustry.org.

What we’re listening to

The Department of Energy recently launched a podcast program called Direct Current. Check it out their first episode on soft costs here!

Keep in touch with us online!