The headline “Chinese turbines” has dominated the news media and blogs regarding wind power during November after U.S. Sen. Charles Schumer sent a letter to U.S. Energy Secretary Dr. Steven Chu and commented, “I'm all for investing in clean energy, but we should be investing in the United States, not China. The goal of the stimulus was to spur job creation here, not overseas.” Schumer was referring to a 648-megawatt wind farm in west Texas being developed by Cielo Wind Power and U.S. Renewable Energy Group with $450 million in funds from the American Recovery and Reinvestment Act. “The wind power project would require 240 2.5-megawatt wind turbines, all of which would be manufactured in China, and will cost $1.5 billion,” the senator's letter pointed out and further noted “Of the 11 wind farm projects that have received grants to date, 695 of the 982 wind turbines installed were built by foreign manufacturers.”

That's not good news to Americans wondering when the recovery will make it to their community with new projects, new businesses, new factories, new jobs, and an improved tax base. Historically, the majority of wind turbines operating in the U.S. have been imported from other countries, led by companies like Vestas Wind Systems in Denmark with a 28% global market share. That's changing though with hundreds of U.S.-based companies manufacturing wind turbine components, and their output reached 50 percent of our country's market in 2008.

Not long after Schumer's alarm, U.S. Renewable Energy Group announced that they intend to build a U.S. wind turbine factory in partnership with the Chinese turbine maker A-Power Energy Generation Systems and will employ some 1,000 American workers. In fact, both domestic and foreign companies are investing in new manufacturing facilities across the country, as the U.S. has surged to become the leading country for wind capacity in the world.

Just this week Secretary Chu announced that Clemson University will receive up to $45 million for a wind energy test facility that will enhance the performance, durability, and reliability of utility-scale wind turbines, stating “Wind power holds tremendous potential to help create new jobs.”

The Chinese turbine dustup has settled a bit with Schumer applauding U.S. Renewable Energy Group's manufacturing announcement. But questions remain. It turns out that the new factory touted by U.S. Renewable Energy Group will not be manufacturing turbines for the west Texas wind farm, while the majority of components for that project were always planned to rely on U.S. suppliers, although the primary technology of nacelles and gearboxes will still come from China. Schumer's not yet appeased.

Meanwhile, far below the fold of the news media, on November 17 hundreds of residents gathered on Vinalhaven, Maine, an island 12 miles off the Atlantic coast, celebrating the ribbon-cutting of the Fox Islands Wind Power Project. The community-based wind farm will generate over 11,000 megawatt‐hours of electricity per year—slightly more than the overall energy needs of both Vinalhaven and the neighboring island of North Haven. The project is connected to the mainland power grid by submarine cables that transmit both ways, so the local utility can access needed energy in times of low wind and contribute excess energy in times of high wind.

The Fox Islands Wind Power Project is powered by three 1.5-megawatt turbines manufactured by General Electric, a U.S. company. All of the project partners are based in Maine, the turbines are owned by the Fox Islands Electric Cooperative, and the project is managed by Fox Islands Wind, LLC, also based on Vinalhaven. The project will pay for itself in 20 years and reduce the electric rates of residents of the islands, which have been twice the national average up until now. 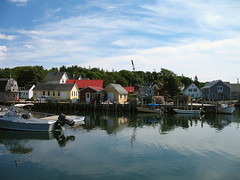 “Maine's strong offshore winds made these communities viable 100 years ago, when sailboats carried granite, timber, livestock, people, food and vital supplies between islands and the mainland,” explains a project fact sheet. “Those winds will now power 21st century homes and businesses on these two islands.”

We need to hear more stories like this about turbines, recovery, and community.