The U.S. market for small wind turbines—those with capacities of 100 kilowatts (kW) and less—grew 78% in 2008, with 17.3 megawatts (MW) of new electrical capacity, according to the 2008 AWEA Small Wind Global Market Study released by the American Wind Energy Association. 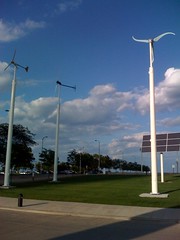 Though small in comparison to the 8,500 MW of commercial-scale wind capacity added last year, the growth is significant with more than 10,000 turbines installed by businesses, schools, colleges, municipalities, and residential homeowners. Wind energy is now seen as a cost-efficient solution for energy needs, as 42% of all new power generation facilities in the U.S. last year included wind power. Public concern about energy independence and environmental issues have also played a role in this developing market.

“Consumers are looking for affordable ways to improve their energy security and reduce their personal carbon footprint,” said Ron Stimmel, AWEA’s Small Wind Advocate. “Small wind technology can be an answer to that search. As government policies have caught up with consumer interest, we’re seeing people all across the U.S. take advantage of this abundant, domestic natural resource and U.S. manufacturers have been able to meet this increasing demand.”

This unprecedented growth combined with the new 30% federal tax credit for small wind energy systems has U.S. small wind turbine manufacturers scaling up for even more growth in the future. The industry predicts a 30-fold increase in the US market over the next five years, even under current economic conditions.