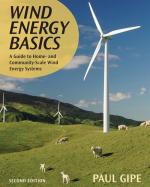 "Wind energy works and makes environmental sense—more so today than ever before—but consumers have to be on their guard," writes wind energy pioneer, expert, and advocate Paul Gipe in his newly revised Wind Energy Basics, Second Edition: A Guide to Home- and Community-Scale Wind-Energy Systems. Gipe has worked for over three decades in renewable energy, has authored seven books, and has lectured widely on wind energy and how to minimize its impact on the environment and the communities of which it is a part.

Gipe is excited to see so much new interest in wind and solar technology, saying "Let's put a renewable energy plant in everyone's back yard. Let's create an energy system for life. Let's do it." But, he is also adamant in guiding people to the right technologies and strategies apart from those who would "seize on the public's fascination with wind energy and sell them wind turbines that perform poorly at high cost." He has tested and documented the performance of small wind turbines, so his updated Wind Energy Basics is an important guide for anyone considering use of wind energy for home, business, or community systems.

"Paul Gipe is an independent, opinionated voice on wind energy, cutting right to the core on almost any wind energy topic. He analyzes the issues with uncompromising standards. He has no trouble sharing the story as he sees it, encouraging all to explore business models and policies that offer something more, something for all of us."

Gipe is a visonary who views wind power as a realistic replacement for the bulk of oil-, coal-, and natural gas– fired electrical plants in the U.S., and as a new fuel for most of the cars in the nation to run on electricity. In this wide-ranging book, Gipe not only covers the basics for understanding how wind turbine technology operates and how to plan a project using it, he makes a broad case for a clean energy future explaining how sustainable energy solutions are doable, can be accomplished much sooner than most realize, and how it will help resuscitate our industrial infrastructure, create jobs, and generate economic opportunity.

For those who are interested in supporting wind energy, Gipe details the advantages of Community Wind projects, offers advice for renewable investment strategies, and explains how government policy could better support energy independence. He doubts the ability of tax incentives and net metering to advance renewables, and he advocates for the adoption of feed-in tarriffs that would guarantee rates and grid connections for independent power producers, following the policies that have been successfully deployed in European countries. "If you pay for it, it [renewable energy] will come."

Listen to or read a transcript of an interview with Paul Gipe at The Oil Drum on the Weekend Energy Listening podcast episode Wind Power with Paul Gipe. For more information about Paul Gipe, his work, and his books, visit his web site Wind-Works.org.

A feed-in tariff is an energy policy that provides for a guarantee of payment to renewable energy developers for the energy that is produced. This type of policy can be thought of as an advanced form of a production-based incentive because payments are made for the actual electricity produced and not for how much capacity is installed. The most common feed-in tariff payment is based on the actual levelized cost of renewable energy generation. This method of payment provides a price adequate to ensure a reasonable rate of return on for investors.

The authors highlight one of the most important elements of a feed-in tariff policy - that it allows for more participants in renewable energy project development. In their analysis the authors state that there are significant impacts of a feed-in tariff on developing community ownership, but it will depend on how the program is structured and payments determined.

You can read the full report here (PDF).

Have you been approached by a wind developer? Are you interested in leasing your land for wind development but want to make sure you are getting a fair deal?

This Introduction to Landowner Wind Energy Associations (LWEA) provides an overview to this model of landowner participation. A landowner wind energy association bridges the gap between full ownership participation and simply leasing your land. This model allows landowners to come together and combine their resources, which provides greater negotiating power with the developer. The association model can also be used to provide financial benefits to all landowners in the association, not just those who host the turbines. Download the two-page handout to learn more.

This handout is designed to help landowners evaluate a wind developer before they sign an agreement. It is intended to provide a brief discussion of many topics and additional resources, including:

This article reprint from Tierra Grande, April 2008, presents an overview of many issues regarding leasing your land to a wind developer. Topics covered include wind data, tax credits, royalties, severance clauses, surface rights and a host of other considerations. While focused on Texas, the article presents information that applies to all wind agreements in general and is useful for both landowners and attorneys.