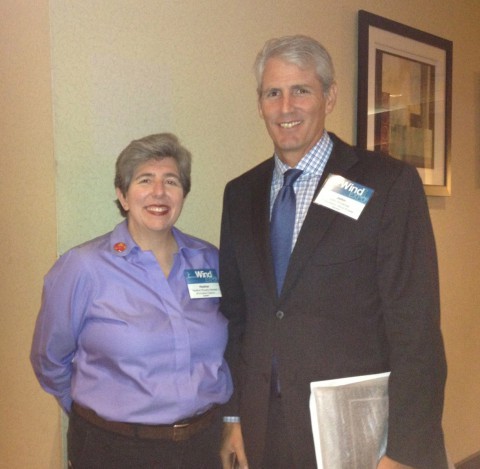 The Windustry Board of Directors along with the Community Wind Peer Group is pleased to announce the 2013 Distinguished Service in Community Wind Award. This award is given annually to a person who has made an exceptionally significant contribution to the establishment and growth of Community Wind as a uniquely valuable form of clean, renewable energy. The recipient of this award possesses outstanding dedication, excellence or achievement and has worked over many years to further the goals of community wind and distributed renewable energy. This person is an exemplary professional and a mentor for others. She is regarded as a creative leader in her professional field and embodies methods of practice and aspects of being that we aspire to ourselves.

The 2013 Distinguished Service in Community Wind award goes to:

Over the more than 17 years Heather has been involved in the wind industry, she has played key roles in a diverse array of distributed, community, and small wind projects. Working on a national basis with organizations such as the National Wind Coordinating Committee, American Wind Energy Association, and the Distributed Wind Energy Association. She started a non-profit NorthWest SEED and now runs her own consulting business. She has been honored by Women of Wind Energy for her mentoring of others. She has been prolific in her publications with the latest effort the annual Small Wind Market Report. Windustry and the 2013 Community Wind Peer Committee applaud Heather’s exceptional efforts, dedication and innovative approaches to help establish and grow the distributed wind and renewable energy market.

The winner of the Community Wind Innovator Award for 2013 is:

California has historically been a leader in renewable energy and wind energy in particular. But throughout its long history California had very little or no community wind installed. Then John and the Foundation WindPower team emerged on the scene. They have put together a “behind-the-meter” business model that works in spite of the way the state policy is written and implemented. They have 11 projects and have installed 16 commercial scale turbines. Windustry and the Community Wind Peer Committee applaud John and his team for their determination, creativity and financial acuity for developing a new approach for building community wind.