Congratulations to the Recipients of the 2014 Community Wind Awards!

Lloyd Ritter, founder of Green Capital, LLC, is the recipient of the Distinguished Service in Community Wind Award for 2014. 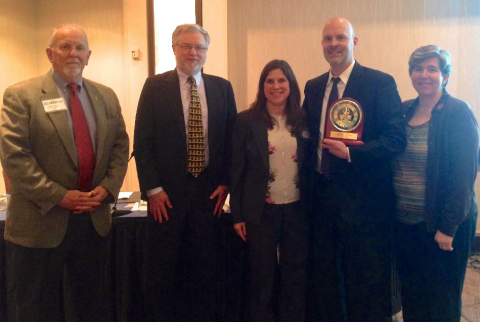 The Windustry Board of Directors along with the Community Wind Peer Group is pleased to announce the 2014 Distinguished Service in Community Wind Award. This award is given annually to a person who has made an exceptionally significant contribution to the establishment and growth of Community Wind as a uniquely valuable form of clean, renewable energy.

The recipient of this award possesses outstanding dedication, excellence or achievement and has worked over many years to further the goals of community wind and distributed renewable energy. This person is an exemplary professional and a mentor for others. This person is regarded as a creative leader in his/her professional field and embodies methods of practice and aspects of being that we aspire to ourselves.

This is the fourth year presenting this annual award. The Distinguished Service in Community Wind 2014 award goes to Lloyd Ritter.

Since 2000 Lloyd Ritter has worked in several capacities to establish and grow community and distributed wind. For several years, Lloyd worked on staff of Senator Tom Harkin, Iowa and was Senior Counsel to the Senate Agriculture, Nutrition and Forestry Committee. Lloyd designed the first ever energy title in the Farm Bill of 2002. This “landmark legislation” has been refined, expanded, and firmed up with mandatory funding in subsequent Farm Bills. Lloyd worked to revise the US Fish and Wildlife Guidelines, so smaller projects have right sized requirements. Over his several years of involvement with community and distributed wind, Lloyd has organized many high level meetings and opportunities for community wind and distributed wind folks to talk with leadership in federal agencies and discuss policy with congressional members and staff. In 2009, Lloyd founded Green Capitol, LLC where he and his associates specialize in clean energy and environmental advocacy, strategic planning and public policy development. Green Capitol’s clients have included Energy Foundation, Governors WindPower Coalition, and the Distributed Wind Energy Association. Windustry and the 2014 Community Wind Peer Committee applaud Lloyd’s hard work and dedication to broaden the scope of national renewable policy to include community and distributed wind energy development and increase its deployment.

The Windustry Board of Directors along with a Peer Group of Community Wind Colleagues is pleased to present the Community Wind Innovator Award. This award is presented annually to an individual who has made significant progress over the past one to two years in forging ahead with new policies, new approaches, new business models or new research to further community and distributed wind energy. This person's ideas and efforts have changed how we think about or perform our work.

This is the fourth year presenting this annual award. The 2014 awardee for the Community Wind Innovator Award is Chris Diaz.

Since joining Seminole Financial Services in 2010, it wasn’t long before Chris was making deals for community wind projects all over the nation. Chris has been responsible for identifying, evaluating and negotiating renewable energy finance transactions, for both wind and solar, between $2 million and $30 million in need of construction/interim financing and permanent debt. It is rare to find someone who specializes in this size transaction and this role that Chris has defined is valuable to the community wind and distributed renewable projects. Also, he has played a major part in integrating new financial strategies such as New Markets Tax Credits. Through his participation in national and regional conferences and frequent speaking engagements, Chris is often sharing information to help make distributed renewable projects more bankable and buildable.

Prior to Seminole, Chris was employed by Credit Suisse, MMA Financial and the Midland Companies where he gained over 15 years of experience with tax credits and financial services.

(This award will be presented to Chris Diaz at the Windpower 2014 Conference in Las Vegas, in May.)